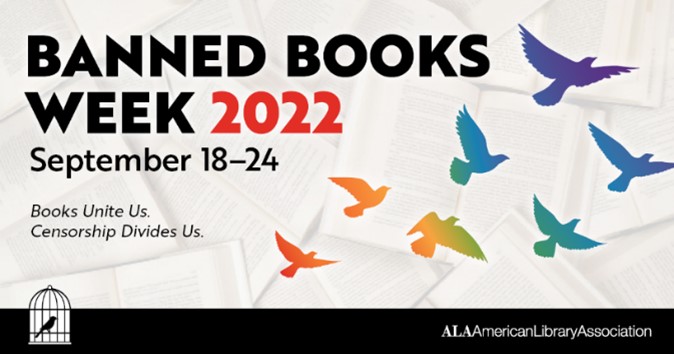 When we read, we are invited to see through another’s eyes. It is no surprise, then, that free access to the written word has long presented a challenge to those who appoint themselves as arbitrators of knowledge and culture, be they political leaders, religious leaders, educators, or even librarians. Most do not go to the extreme of the Roman emperor Domitian, who reportedly executed the author, seller, and enslaved scribes who produced copies of an unauthorized work. Nonetheless, efforts to censor and control have persisted throughout history. Ideological struggles during the Reformation, the Enlightenment, and times of armed conflict from colonialism to the world wars led to book destruction and bans. Since the early days of printing, there also have been those who believed certain groups—women, children, people of color, those of lower economic status— could not be trusted to choose what to read and had to be protected from themselves.

Book bans and censorship are not just the stuff of history, however. In 1982, following a surge in the number of attempts to ban books, the Association of American Publishers contacted Judith Krug, Director of American Library Association (ALA) Office for Intellectual Freedom with their ideas of how to bring attention to the issues of censorship. The result was the first Banned Books Week. For the last forty years this week has been an annual celebration of the freedom to read. It has also served as an awareness campaign to highlight banned and challenged books as well the people who have been persecuted because of the works they write, disseminate, or read. While especially promoted by ALA and Amnesty International, the event brings together the entire book community to highlight the value of free and open access to information. 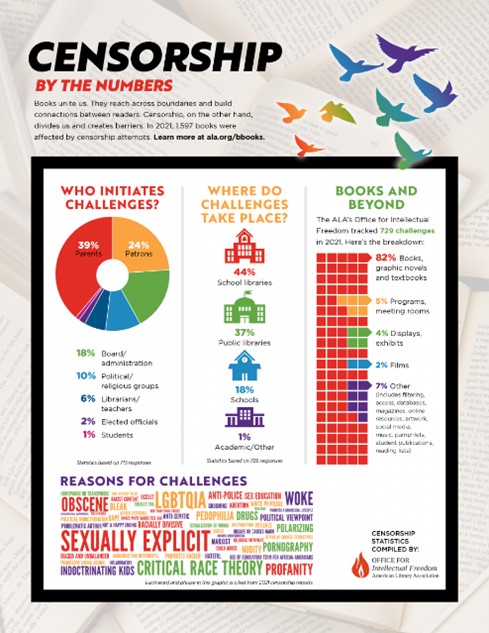 Critics of Banned Books Week argue that in the United States, at least, books are not really banned. They assert most of the books that are challenged each year – that is, an attempt has been made to remove or restrict access to them – are not actually removed from libraries. Further, even if they are removed, the books can still be purchased. Yet just because the freedom to read often has been successfully defended, does not mean that the issue does not exist. There were four times as many attempts to ban books in 2021 than in the preceding year. To see lists of the most challenged books by each decade going back to 1990, check out the ALA’s Frequently Challenged Books. You can find a sampling of these books on our display on the third floor of the Library. You also can measure your knowledge of banned books through our Trivia Contest.

The theme for Banned Books Week this year is Books Unite Us. Censorship Divides Us. “Sharing stories important to us means sharing a part of ourselves. Books reach across boundaries and build connections between readers. Censorship, on the other hand, creates barriers. Banned Books Week is both a reminder of the unifying power of stories and the divisiveness of censorship, and a call to action for readers across the country to push back against censorship attempts in their communities.” (ALA Banned Books Week)