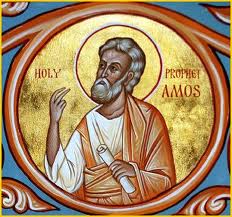 In the 8th century BCE, during the time of the prophecy of Amos, the Israelites were experiencing “prosperity and peace” (Mays, 1969, p. 165).  Although not united, there was little tension between the Northern and Southern Kingdoms at this time.  There was “little threat from neighboring and foreign powers” like the rising Assyria (Snyman & Peels, 2012, p. 17).  In addition to the sense of peace was a spirit of fortune and success.  Some of the Israelites even owned both a summer and winter home, according to Amos 3:15.  Nonetheless, such prosperity and peace was sometimes the root of their sin as they became content and forgot God’s role at the center of their lives.

Amos was not a “professional prophet.” He made his living by herding sheep and tending to sycamore trees. His personal wealth and prominence gave him a greater ability to speak to other wealthy people and those of high esteem.  These people were the main audience of Amos’s message (Guyette, 2008, p. 15-21).

Although it is hard to determine the date in which prophets lived, there are many factors that help researchers estimate dates.  Schart (2007) explores different dating techniques such as the reign of various kings and events such as natural phenomena. Schart claims that Amos came first but his period of prophecy probably overlapped with that of Hosea.  According to Schart (2007), some key hints to date this book are found in Amos 1:1, which says, “In the days of King Uzziah of Judah and in the days of king Jeroboam son of Joash of Israel” and “two years before the earthquake.” For more on dating, see Schart, 2007, p. 139-141.

Outline of the Book of Amos

The format of the Book of Amos is accessible, and the book is relatively short.  According to Bulkeley (2013), by “turning to examine the structure of Amos, we can note that the book comprises many short, neatly distinguished, speech units” (p. 159).  Note the following outline of the Book of Amos.  For another reference, please see the “Introduction to Amos” in the Anselm Academic Study Bible.

Amos is best known for his message of social justice. Without military threats and other uprisings, the Israelites were comfortable with their own wealth and did not recognize the importance of helping the poor.  However, Amos claimed that the way people treated each other and built relationships was part of the covenant between Yahweh and his people.  Thus, Amos emphasized just interactions between people.Additionaly, the Israelites’ lack of concern for the poor resulted in punishment and prompted much of Amos’ prophecy. Amos tells his audience they will be punished by God because they “do injustice and oppress the poor” (Schart, 2007, p. 145). Amos was also concerned that the wealthy were using their money to circumvent the law, with bribes and debt slavery (Guyette, 2008, p. 15-21). Because of his views, Amos was not always viewed favorably by those in Israel. According to Guyette (2008), Amos’s audience disapproved of him because of the “treasonous” message that could be construed from his words.  The words of his prophecy were counter-cultural and were often perceived as an attack against the people in power.

There are many scriptural references to Amos' work for social justice. In the following examples, God condemns the people for crimes of injustice. Philistia, Tyre, and Edom have turned on each other and forgotten “their covenant of brotherhood” (Amos 1:9).

Other Themes in Amos

Amos’s message makes clear that God’s will for social justice and piety extends beyond one group of people to the entire world. The oracles of Amos 1:9 address various nations, emphasizing the universality of God’s concern about the sins of all people.  God is concerned with their “ethical malpractices” (Peels & Snyman, 2012, p. 21-22).  According to Bulkeley (2013), many of the other themes within the book “depend on belief in Yhwh’s authority over the whole world, not just the chosen people” (p. 158).

Day of the Lord

Amos discusses the Day of the Lord as a time of darkness and punishment (Schart, 2007, p. 144).  He tells his audience to stop yearning for this day because it will not be what they expect.  Instead, as a result of their behavior, the Day of the Lord will be when God will avenge the Israelites and inflict His wrath.

There are many different definitions that people have for culture, all of them are pretty similar. The best definition of culture and how it relates to Religion is from Helen Spencer-Oatey, who defines it as “Culture is a fuzzy set of basic assumptions and values, orientations to life, beliefs, policies, procedures and behavioral conventions that are shared by a group of people, and that influence (but do not determine) each member’s behavior and his/her interpretations of the ‘meaning’ of other people’s behavior.”, one can understand what culture is from her definition because it sets out solid principles of what culture should be, but also makes it clear that it changes for everyone.

The culture of Amos the prophet who was a prophet of the north took on a different role than the other prophets. Other prophets like Hosea and the culture that surrounded them was war torn and had many political and social uprisings. Under Amos, none of this was going on. There were probably no uprisings during his time because there were a lot of wealthy people who were not being threatened by the other people. However what makes the culture around Amos so unique is that he strived to connect these ordinary people with the wealthy people and have them work together. Amos was a prophet of social justice. Amos let’s these wealthy people know that having every person work together is what god wants. Amos lets the rich know that if they continue to marginalize the poor, God will not be forgiving. It was unchartered territory for a prophet to go against the norms of society. “I will not revoke its punishment, Because they sell the righteous for money and the needy for a pair of sandals." (Amos 2:6-8)The wealthy were not used to dealing with a prophet who was calling them out for using their money to bend the laws, and oppress the poor people. Despite this, Amos was determined to try and change the way wealthy treated the poor. Amos was not the stereotypical prophet that the biblical era has come to known. He made his living off of herding sheep, which allowed him to deliver his message of social justice to the wealthy. Other themes that Amos tried to fight against was religious hypocrisy that he saw in Israel. Amos essentially says that people just act religious because it is socially acceptable to do so, yet “they don’t have a foundation of true faith or devotion.” (Matthews, 2012). Amos was a counter cultural prophet who challenged the way things were supposed to be and many people ridiculed him. He challenged the social and political establishment and fought for social justice for all.

Most prophets during this time were not up to the challenge of the role of a prophet. Most prophets including Amos, doubted their ability to fulfill their task and didn’t necessarily fit the description of what most people would consider a prophet to look like. Despite this, most of them stepped up and delivered as a prophet. This was such a taboo in society that most people didn’t take Amos seriously. It was not normal for one to challenge hierarchy in society. Amos didn't back down even though people shunned him and accused him of treason. He said that God will act like a roaring lion of social justice that swipes through Israel making it the promised land for anyone. He says that anyone who refuses to be socially just will feel the wrath of God. Even though Amos is from the north, he is tasked with adressing many different surrounding nations such as Judah, Syria, Philstra, Phonecia, Edom, Ammon, and Moab (Bamidele, 2016). The nation’s people who are treating people inhumanely will not be rescued from God. God will strike them down for their wrong doings. Their wrong doings range from sexually abusing young females, enslaving people andusing poor people for prophet for themselves.  “The people are abusing the covenant of YHWH and the God of the covenant must punish them for it.” (Mamahit, 2012). God had to act in this manner because the people of Israel were his chosen people, and they knew what would happen if they broke his law, and they continued to do so, even with Amos trying to correct the social injustice. The writings and culture of Amos undoubtedly had an influence on later prophets and their attitude in both religion and culture. Today Amos is often cited and remembered as a prophet of social justice.

-This journal is very helpful because it gives readers concrete examples from Amos on the nations he addressed. Another good thing from this journal is it relates to modern day issues like the inequality we see in Nigeria where poor people are being exploited by the upper class. This is another good resource because it makes it obvious that it would help Nigeria if they had someone to stick up for them such as Amos. However they do have his readings to look back on too look for guidance.

-This journal article gives an inside look at the social injustices that were occurring during this time, and how Amos was directly involved in trying to change the people of Israel’s way of life. There is direct examples that relate unjust wrongdoings that took place between the rich and the poor.

-Page 85 was where quote was found, was nice to hear about some of the other things that were wrong with the culture in Israel during Amos' time.