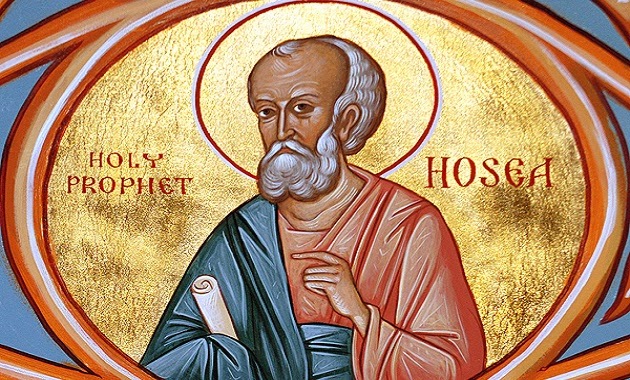 Hosea, son of Beeri, was a prophet from the Northern Kingdom. The name Hosea literally means “Yahweh saves” (Flanagan, 1961, p. 28). He is believed to have prophesied during the second half of the eighth century, close to the time of Amos (Peels & Snyman, 2012, p. 27).  Hosea began his prophecy during the reign of King Jeroboam II (785-743 B.C.E.) which was a period of stability for Israel. Assyria was starting to rise up against Israel, however. Hose’s prophecy extended through “the reigns of Jeroboam’s three successors, Zechariah (743), Shallum (743) and Menahem (743-738)” (Flanagan, 1961, p. 28). He refers to himself as “the watchman of Ephraim,” which indicates that he lived in that tribal region (Kraeling, 1969, p. 49). See map.

Hosea was married to a woman named Gomer, whose adultery affects his prophecy. They have two sons and a daughter, “all with ominous names selected to symbolize the divine message which the prophet delivered to the people” (Flanagan, 1961, p. 28). Hosea uses a prolonged metaphor of marriage, relating his experiences with an adulterous wife to Israel and God as the “deceived husband” (Peels & Snyman, 2012, p. 28).

Culture, a term used to describe the values, beliefs, norms, and customs shared by a group of people, set the foundation in the Book of Hosea so he could create a living metaphor of the relationship between God and Israel. Culture directly affects the way people in a group act and interpret the meanings of those actions. The beliefs, attitudes, and actions of people in a group help to create the culture, directly impacting how messages are spread and understood.

Hosea was a prophet to Israel in the midst of social and cultural turbulence. At the time, Israel was under siege by the Assyrians.  However, as far as Hosea was concerned, the problems they were dealing with were directly affected by their strained relationship with Yahweh. Many of the residents of Israel practiced Baalism; a religion that exposed the people to many forms of nature-based worship.  They understood God as one of nature; whereas Yahweh was understood as a God of history existing outside of time.  Due to this complex notion, they resorted to valuing tangible things that were essential to sustaining life, such as crops and trades.  For example, if they were experiencing droughts, the men of the tribes would go to the temples and sleep with the temple prostitutes, explaining how many of their behaviors were directly driven by their needs as a people.  (Matthews)

One of these primary behaviors that Hosea particularly focused on was traditional marriage. In ancient Israel, marriage was never an equal partnership. Although love and care was expected to be mutual, the man was typically seen as the superior figure in the relationship. Divorces were easy for men to get, but they were nearly impossible for women.  Hosea specifically used his own marriage to Gomer as a metaphor of Israel’s strained relationship with God.  The people’s interpretation of the metaphor would be influenced by their attitudes and beliefs concerning marriage. (Moon)

One of the most important and recognizable aspects of Hosea’s prophecy is his use of metaphors. The most evident metaphor used was that of “husband and wife.”  As Hosea 4:12 points out, this image was meant to let Israel know they were “forsaking their God” by their behavior, comparing Israel to an adulterous wife (Hosea 4:12).  The metaphor is used to illustrate that when Israel left God for false idols, God would not abandon Israel and brought them back, even though He had forsaken them.  Other metaphors used by Hosea include “God as a lion” and the “parent-child” metaphor.  God is described as a lion “tearing his prey and departing, carrying it away and no one can save it” (Hosea 5:14), expressing God forsaking Israel for leaving Him.  Hosea also describes God as a “parent” to Israel.  Hosea references God “teaching Ephraim [Israel] to walk,” as well as, “when Israel was a child, I [God] loved him out of Egypt…”  Hosea even goes so far as to say that God calls Israel “his son.”  Metaphors are an important part of any argument for Hosea’s reliability.

Loyalty and Devotion to God

Hosea displays loyalty to God by going to extreme measures.  One way he demonstrates his devotion is by following God’s call to marry a woman named Gomer.  Gomer, a prostitute, was known to be unfaithful, but Hosea married her regardless.  After having three children, their marriage breaks down and Gomer wanders from Hosea into the company of other men.  Hosea is asked to search for Gomer and pay for her release from this trade. He abides God’s wishes, showing paramount loyalty to the Lord.

Speaking for the Minority

Hosea spoke out against the people of Israel when they were being unfaithful to God. He directly prophesied about the Assyrian king and priests, warning that they will have to answer to God for their actions.  In order to make his point, Hosea compares Israel to a “cheating wife,” a metaphor that not only gains attention but also deeply offends those in positions of power and authority.  “The point of the marriage metaphor is to justify the violence and punishment the subordinate endures and to exonerate the dominant partner from any appearance of being unjust” (Weems, 1996, p. 19). This was a successful method used by Hosea; by capturing the attention of his audience, he found a way to force those in authority to consider his message.  The men he targeted were men of importance, and Hosea knew they could sway the ways of the majority.  This method added to Hosea’s credibility as a prophet.

Because this comes from the Jewish Virtual Library, we knew we could get credible information.  The source is sponsored by the American-Israeli Cooperative Enterprise, an organization that collects information about Jewish history and culture and publishes it to make available to those who wish to learn more about it.

Matthews dedicates an entire chapter of his book to Hosea and God’s message to Israel.  In the source, it references his messages in both the context of 8th century BCE Israel as well as the extrapolated message for today’s culture.  For an in-depth critique of the prophets and popular interpretations, Matthews provides plenty of valid information.

In Moon’s article from 2015, he argues that the metaphor Hosea uses is actually on the basis of shame. Moon explains how Hosa accepts a shameful role as the husband of a whoring wife, and this is analogical to Yahweh’s shameful status connected to Israel.

Peels, H., & Snyman, S. (2012). In The Lion Has Roared: Theological Themes in Prophetic Literature of the Old Testament. Eugene, OR: Prickwick Publications.

Helen Spencer-Oatley compiled a list of the many definitions of culture;she explains what the term is and why it has been so difficult to define for years. She cites different anthropologists and their attempts at the defining it, while also explaining many key characteristics of culture.