A History of the Southern Kingdom

1.    Syro-Ephraimite crisis – attack from Tiglath-Pilesar III, who was a large threat to Judah between 734 BCE and 732 BCE.

2.    Northern Kingdom of Israel rebels against Assyria started in 722/721 (see 1.a. under the section "A History of the Southern Kingdom")

4.    Siege of Jerusalem in 701 BCE, Hezekiah was ruler of Judah – he started a religious reform and rebelled against Assyria with the help of Egypt. (see 3.a. under the section "A History of the Southern Kingdom")

Third Isaiah (after 539 BCE, the end of the Babylonian Captivity)

In the book The Lion has Roared,chapter 12 “Isaiah, Prophet of the Lord Who Heals His people and Restores Their Land” is written by Hennie Kruger.  She specializes in the description of the theology contained in Isaiah: God is Lord, God’s kingship and throne, The Holy One of Israel, YHWH and the gods, The Servant of the Lord (because Isaiah specialized the suffering servant), and Eschatology (concerning death, judgment, and final destiny of humankind).

The Theocracy: Ezra and Nehemiah, and the Prophets Malachi, Jonah, and Joel

Judaism remained largely Middle Eastern in context until the conquest of Alexander the Great in the 4th century B.C.E., which brought Judaism, the remnants of Judah, into the sphere of the Mediterranean world through the Hellenistic era (in which the revolt of the Maccabees occurs), the Classical era (under Rome), the Byzantine era (under Constantinople), and ending with the Islamic/Medieval era (640-1918 C.E.), which was briefly interrupted by the Crusader period (1099 C.E.-1260 C.E.) (Miller and Hayes, 1986, p. 26-27). 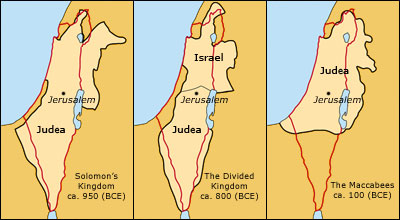 This picture came from http://history-of-israel.org/history/chronological_presentation11.php​

Timeline: Prophets in the Reigns of Kings of Judah and Israel.  From:

Culture in Israel and Judah

The land of Israel is commonly known as the land of Moses. The people who lived in the Israel were commonly referred to as the people of Moses. Moses led the Israelites out of slavery, led them to the promise land and spoke the world of the Lord. Although Moses was not considered an actual prophet, he followed the basic guidelines of a biblical prophet. Long after Moses has passed the people of Israel continued to live by his teachings and continued to pass along the words Moses had spoken. “While ordinarily the Old Testament does not give Moses a title, when it does those it gives him are particularly suited to a prophet; that is they conform generally to the nomenclature of prophets elsewhere. According to Psalm the Lord sent Moses to perform “signs” and “wonders.”” (Lierman 33). The northers were in awe of these wonders, and because of this, Moses played a huge role in the cultural identity of the north.

After the split of the northern and southern kingdoms, the southern kingdom wanted a new cultural identity. They did not want to continue being known as the people of Moses. Although the kingdom of Judah did follow the teachings of Moses, the people of Judah referred to themselves now as the people of David. David won the hearts of his people when he famously brought The Ark to Jerusalem. “David was dancing before the Lord with all his might, while he and all Israel were bringing up the ark of the Lord with shouts and the sound of trumpets”. (2 Samuel 6.) The people of Judah lived their lives based on the word of David. David was a great military leader and economical king. The people felt a great sense of pride for David, and passed along his word for many years after David’s passing. The culture in the south differed greatly from the based on the fact that Moses no longer had such a prominent role in the eyes of the people. Moses was not as culturally important as David now was.

In the introduction to Isaiah, the Anselm Academic Study Bible gives light to some political and geographical information pertaining to the time of Isaiah.  It also provides information on the most prevalent prophecy given to Isaiah including how Isaiah is split into three different sections over the period of the Exile.

In the book The Lion has Roared, chapter 12 “Isaiah, Prophet of the Lord Who Heals His people and Restores Their Land” is written by Hennie Kruger.  She specializes in the description of the theology contained in Isaiah: God is Lord, God’s kingship and throne, The Holy One of Israel, YHWH and the gods, The Servant of the Lord (because Isaiah specialized the suffering servant), and Eschatology (concerning death, judgment, and final destiny of humankind).

The introduction of Jeremiah in the Anselm Academic Study Bible describes the history surrounding Jeremiah’s days of prophecy.  It exemplifies the fact that the people of Judah were in religious turmoil and questioning whether or not God was still with them.  Kathleen O’Connor discusses Jeremiah’s world in her article “The prophet Jeremiah and exclusive loyalty to God”.  She states that, “Jeremiah's world is a place of disaster. Disaster created the book and led to Jeremiah's prophetic calling. No matter when the book received its final form, the tragic events surrounding and following the Babylonian invasions of Judah (597,587,582 B.C.E.) mark its every passage. Every poem, narrative, sermon, or symbolic act of Jeremiah relates to the Babylonian invasions one way or another, either announcing them, explaining them, or offering hope for surviving them” (O’Connor 2005).  Jeremiah’s life as a prophet revolves around the invasion of Judah by Babylon and the subsequent exile.

Jeremiah’s enacted prophesies are some of his most important.  One such prophecy is when Jeremiah smashes a clay pot on the ground, saying that “Yahweh will break this people and this city, as one breaks a potter’s vessel, so that it can never be mended” (Jer. 19:11).  In this case, the symbolism is obvious that the pot is the country of Judah, and its people will be broken apart and sent into exile.

Another important enacted prophecy from Jeremiah is when Jeremiah wears a wooden yoke around his neck to symbolize that Judah needs to submit to Babylonian rule.  This view is unpopular among the ruling class and other prophets, who eventually come take the wooden yoke off of Jeremiah and smash it, in an attempt to show that Judah will resist Babylonian rule.  However, Jeremiah comes back with an iron yoke, designed to show it is God’s will that the people of Judah submit to Babylon.

Anselm Academic Study Bible and Matthew’s introduction to Ezekiel, describe his life and emphasize the fact that Ezekiel uses many symbols through his “enacted prophecies” and his many visions. One of Ezekiel’s visions describe him with God in a valley of dry bones, whom are symbolizing the people of Judah.

The Vision of the Valley of Dry Bones entails Ezekiel seeing himself standing in a valley full of human remains. God commands Ezekiel to carry a prophecy. Ezekiel then witnesses the human figures come together and become covered with flesh, tendons, and skin. These human bodies symbolize the People of Israel whom are in exile.Then, during this Vision, God also shows Ezekiel two sticks and how they are to symbolize God’s plan for the future and describes how the two sticks represent Judah and Israel unifying once more. Which will be reigned by a descendent of David once more. (The idea of creating peace and harmony between the nations). “In 24:16-24 Ezekiel himself symbolizes the nation of Israel as a whole, and in a similar way the sticks of Ezekiel 37:15-28 must represent the kingdoms of Israel and Judah, a representation strengthened by a metaphoric connection of sticks with scepters” (Keck, 1990).

Enacted Prophecies – God required Ezekiel to engage in a series of symbolic and often outrageous acts designed to draw attention to him and make an indelible impression on his audience.  (This is connected to the Examples of Enacted Prophecies...)

4. He then retrieves a few hairs and binds them to his prayer shawl, which signifies that only a few of the people, a remnant, will survive (Ezek. 5:3). While the act provides no hope for Jerusalem’s immediate future, it does signal the hope that a few of the righteous will survive the destruction. (Matthews Pg. 162-163)

The Lion has Roared chapter 10 “Ezekiel, Prophet of the Glory of the Lord” by Herrie Van Rooy also focuses on the theology of the Book of Ezekiel being: Ezekiel and the prophetic calling, the crisis of God’s presence, A radical theocentricity, Judgment and restoration, Repentance, Individual responsibility, and The future of the house of David.

Finkelstein, Israel. "State Formation in Israel and Judah: A Contrast in Context, A Contrast in Trajectory." Near Eastern Archaeology 62, no. 1 (March 1999): 35-52. ATLA Religion Database with ATLASerials, EBSCOhost