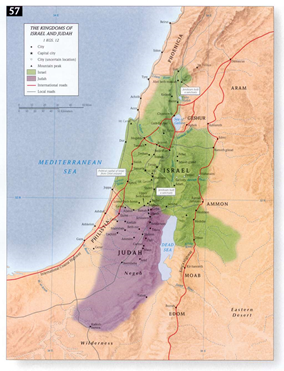 This map is from http://www.studylight.org/miscellaneous

The following information is prominently drawn from The Lion has Roared by H.D.L Peels.

Jeremiah was born roughly around 650 BC, in a small village just North of Jerusalem known as Analoth (Peels, 2012, p.96). His early life overlaps with the kingship of Josiah. (Peels, 2012, p.96). The son of a priest, Jeremiah had exposure to religious life from birth. According to tradition, his destiny as a prophet was determined by God before he was even conceived (Jer 1:15). This may explain why his journey as a prophet began at such a young age. His career is believed to have started when he was around 22 to 23 years old (Hyatt, 2012). He is known as ‘the weeping prophet’ because he often complained to God such as in chapter fifteen where he moans about the hatred he is subjected to in his prophetic life (Jer 15:10-21). Jeremiah was very much hated in his time by both high Jewish officials and commoners, neither of whom accepted his message. Moreover, he was never allowed to marry by God and therefore lived a very lonely life (Peels, 2012, p.96). He was subject to beatings by the false prophet Pashhur and was imprisoned by King Zedekiah—though he sought Jeremiah’s guidance while he kept him prisoner (Jer 20:1-6). Jeremiah would continue to prophesize until shortly after the fall Jerusalem to the Babylonians in the year 587 BC (Peels, 2012, p.96). After the fall of Jerusalem, Jeremiah fled with a small group of Israelites, against his will, to Egypt. The Judeans were fleeing reprisal for the assassination of a Babylonian appointed governor (Hyatt, 2012). Jeremiah received prophetic messages from God saying He did not want the small group of Judeans to leave their homeland, but they abandoned it anyways taking Jeremiah with them (Jer 41-43). Jeremiah died in Egypt around 580 BC; it is traditionally believed that he was stoned to death by the group of Judeans he left for Egypt with (Hyatt, 2012).

Jeremiah delivered his prophesies during a politically unstable time in Judah. He saw the discovery of the book of Deuteronomy and subsequent reforms by Josiah. He also lived during the reigns of three different Kings of Judah all of which fell from the throne.

Finally, he witnessed the destruction Jerusalem by the Babylonians. The reforms to the temple by Josiah included cleansing Judah of all idol worship and making the central location of sacrifice the temple in Jerusalem (Dempsey, 2013, 1249). Judah was also experiencing a brief period of prosperity under Josiah. Once dominant power of the Middle East, the Assyrian empire had fallen; this allowed the once Assyrian controlled Judah to expand its territories and re-establish its government, (Hyatt, 2012). Josiah was killed in 609BC in a brief skirmish with the Egyptian Pharaoh Neco; Josiah’s son, Jehoiakim, would take his place (Peels, 2012, p.98). After the fall of the Assyrian Empire a new threat to Judah had arisen, the Babylonians. The Babylonians attacked Judah and left it as a vassal state. Jehoiakim made an alliance with the Egyptians who had fought against—though lost to—the Babylonians in 605 BC (Hyatt, 2012). This coalition would prove very beneficial to the Judeans as the Egyptians would stop an invasion of Judah by the Babylonians in 601 BC, luring Jehoiakim into a false sense of security where he refused to pay tribute to the Babylonians (Peels, 2012, p.98). The Babylonians attacked Judah for this and Jehoiakim was killed during the siege. They then captured Judah after its surrender and took the entire elite class, including the current king Jehoiachin, and sent them to Babylon. Jehoiachin’ uncle, Zedekiah, was made king by the Babylonians. (2 Kings 24:18-19). Jeremiah visited King Zedekiah to deliver the Lord’s message. The message was to surrender to Babylon, because their military was stronger than Judah. Unfortunately, King Zedekiah did not listen to Jeremiah, and removed him from the King’s sight. Jeremiah then visited the Temple and gave the warning to the people, and that G-d was on the Babylonians side and the people will face the consequences if they did not surrender to the Babylon’s. Jeremiah was kicked out from the temple, for giving false warnings. Zedekiah attempted to rebel against the Babylonians as well but failed and was killed. (Dempsey, 2013, 1248). The Babylonians also destroyed the temple of Jerusalem and exiled all Judeans who had rebelled against them (Hyatt, 2012). 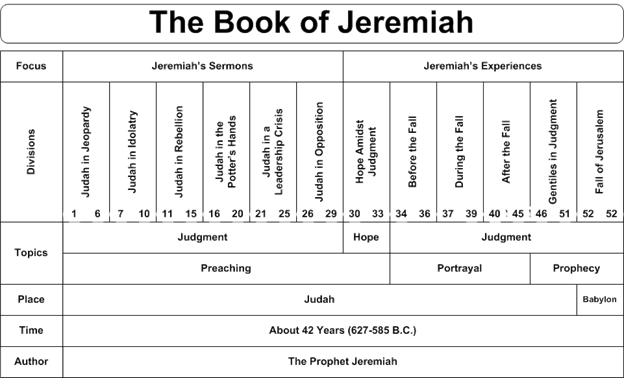 This image is from https://whatshotn.files.wordpress.com/2013/07/timeline-of-jeremiah.gif

1: Jeremiah called as a prophet

2-25: During the time of Josiah and Jehoiakim

2-6: Call to repent to God and the announcement of the “enemy from the north”

8-20: Final warnings and transition to inevitable judgment; the so-called confessions of Jeremiah

21-25: Judgment is coming on kings, prophets, and nations

26-36: During the time of Jehoiakim and Zedekiah

30-33: Jeremiah’s “Book of Comfort” and promises of salvation

37-45: Jeremiah and Zedekiah; the fall of Jerusalem; the “postlude” under Gedaliah and the flight to Egypt

46-51: Oracles against the nations, culminating the great oracle against Babylon

52: Historical conclusion Jerusalem falls and the temple treasure are carried off; the release of Jehoiachin

In the book of Jeremiah, one finds a variety of literary styles ranging from poetic, to prophesy, to prosaic narrative, and finally speeches. He uses a substantial amount of repetition and numerous quotations and allusions to passages from other books in the bible (Appleby, 1956, p.367-368). There is no visible chronological order within Jeremiah’s writings and there are certain passages that even conflict with one another (Peels, 2012, p.99). While some scholars deem Jeremiah’s book “unreadable” (Peels 2012, p.99), upon closer examination it can be noted that he directs his writings according to years and dates. G. Fischer, for instance, speaks of a “deliberate, intentional composition from beginning to end” (Fischer 2007, p.114). In spite of the disparity of the material, the book of Jeremiah can be divided into three collective parts that help determine its structure: 1) the prophetic activity during the reign of kings Josiah, Jehoiakim, and Zedekiah; 2) the distinction between the words of and reports about Jeremiah, between poetry and prose; and 3) the content and themes of the passages (Peels, 2013, p.100).

In an article by Helen Spencer-Oatey, “What is Culture?” she brings up an idea about culture which is a little different. This idea is that culture is a very difficult concept to pin down to one explanation. She shares a quote of her own which says that, “Culture is a fuzzy set of basic assumptions and values, orientations to life, beliefs, policies, procedures and behavioral conventions that are shared by a group of people, and that influence (but do not determine) each member’s behavior and his/her interpretations of the ‘meaning’ of other people’s behavior.” This quote shares the idea that there are many different explanations and they can mix and to become a cultural attitude and motive that is difficult to understand.

One of the first explanations talked about is that culture affects behavior and interpretations of behavior. This is a good explanation, things can mean many different things to different people which comes from the social norms of the area. Later on, the idea that culture is learned gets brought up. This idea is important and can be used together with the earlier concepts. Culture having an effect on interpretations of behavior and how it can be learned are very similar. Culture handed down to younger generations from older generations. How the younger generations react to discrepancies in a given situation can be a correlation to the culture they learned early in life. In the Old Testament, Prophets have trouble changing the way the people of Israel act because they have a certain culture of how to act. The prophets are attempting to change the culture of the people to one that is different than their own, which is a difficult task. This is conveyed in the book of Jeremiah. The way that the kingdom bounces from King to King in his time. The first King Josiah was a God fearing descendent and taught by the Word of the lord. Next was his son Johoiakim, who was against the word and would completely disregard the Torah. This is a complete contrast and would confuse the people of the kingdom as they didn’t have a firm grasp on what to believe. After Jehoiakim, Jehoiachin was put forth to rule the Kingdom. Babylon took over during Jehoichins rule and exiled him as King. The Babylonians wanted to name their own King, which would be Zedekiah. (Jer. 37:1) They did not want to accept him as their own King and regarded Jehoiachin as the legitimate King.

From the article by Edward Silver; “Performing Domination/Theorizing Power: Israelite Prophecy as a Political Discourse beyond the Conflict Model”, Silver explains about prophecy of Jeremiah, the political issues, symbolism, and the yoke presented. The article gave helpful information of cultural background during Jeremiah’s time. Especially, with religious issues that was presented in that time period. In Jeremiah 16:8 “they profaned my land with the corpses of their detestable idols, and filled my heritage with their abominations.” Jeremiah pointed out one of his difficulties when presenting the Lord’s message through the people. At some point, Jeremiah lashed out against the sins of idolizing other gods, which sometimes involved sacrificing their children to other gods. Despite the wrong doings they were committing Jeremiah had love and hope for his people and prayed for them, which the Lord Himself told him not to. That passage is found between Jeremiah 7:16 to 11:14.  Overall, Jeremiah’s issues for saving his people’s rightful culture following G-d’s laws was challenging. Jeremiah was called to live an unhappy task of announcing the destruction of the Kingdom of Judah.

Appleby, J. (1956). Book Review: The Book of Jeremiah and Lamentations.Interpretation: A Journal of Bible and Theology, 367-368