Isaiah II is the author of chapters 40-55 of Isaiah (Blenkinsopp, 54). He (most likely male) wrote at the end of exile after Persian Emperor Cyrus conquered Babylon 539 BCE and passed a decree that allowed exiles to return to their homeland in 538 BCE (Peels, 2012) (see timeline). Isaiah II is an anonymous author writing in the Isaiah tradition (New American Bible, 2013). The first Isaiah (chapter 1-39) lived pre-exile days around 740-700 BCE while the third Isaiah (chapter 56-66) wrote on post-exile days around 515-480 (New American Bible, 2013).

The age of exile officially started in (586 BC) when Babylon conquered the Israelites and destroyed the temple. As punishment for Israel’s “defiance” to the whim of Nebuchadnezzar, the temple was destroyed. The gates and walls were burned to symbolize Israel’s complete defeat. As one can see from the map, the red shaded area is the most likely path that the Babylonians took to transport the Israelites to Babylon. In total there were three waves of Israelites: the first in (605 BC), which included the prophet Daniel; the second in (597 BC); and the last in (586 BC) when the city fell. At this point, “gulat bavel” or the Babylonian exile, began for those who were deported out of Judah. Also, it is useful to note that this point marked the end of the first temple period and the reign of kings in Judah (NIV Study Bible, 2011). 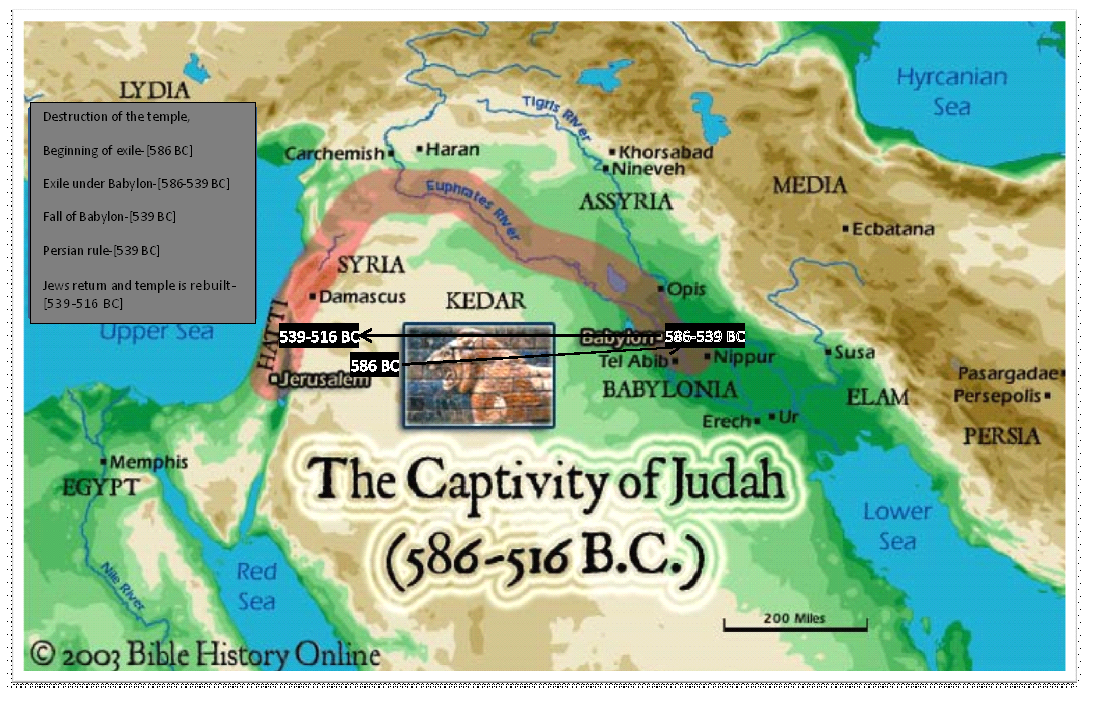 During the exile, [see Historical Events in Southern Prophesy for details] the prophets all had a part in bringing God’s word to his people. Isaiah prophesized, for what we realize to be the period towards the end of the exile, before the Persians came into power and King Cyrus sat at the throne. Isaiah brought the message of hope and dignity to God’s people such as in his servant of the lord passage (Isaiah 42:1). He made it clear that the people would first suffer in order to be free, and the realization of salvation came in (539 BC) when Babylon fell to the Persians. King Cyrus came into power in (539 BC) and decreed that the Israelites be free and the temple rebuilt. It had been 70 years since the temple’s destruction, and in (516 BC) the exile officially ended when the Temple finally stood again, marking the beginning of the second temple period, which would stand for hundreds of years.

“Culture is a fuzzy set of basic assumptions and values, orientations to life, beliefs, policies, procedures and behavioural conventions that are shared by a group of people, and that influence (but do not determine) each member’s behaviour and his/interpretations of the ‘meaning’ of other people’s behavior.” (Spencer-Oatey)

Culture can be defined as a way that groups of people determine what is and what is not normal. Throughout history, the culture of different civilizations, as well as different time periods, have changed over and over again. It is important to understand just what the culture of the time period is whenever reading a book in the Bible, as it better helps one understand the deeper meanings in the stories told throughout. In this section, the culture of the time period will be discussed in the terms of the orientations of how the people carried themselves throughout their day to day lives.

The story of Isaiah II (Chapters 40-55) was writing during the Babylonian exile, which began in 586 B.C.  At the start of Isaiah II in chapter 40, Isaiah was bringing people comfort as they are about to return.  It came to a close when the Persian Empire, led by Cyrus, took over in 539 B.C. At this time, some of the Jews started returning from exile, although most were hesitant at first. By 515 BC, some of the Jewish people who were in exile started to rebuild the Temple in Jerusalem. The return, however, was not without problems: The returnees found themselves in conflict with those who had remained in the country and now owned the land.  In addition, there were further conflicts over what sort of government. Nevertheless, lot of this culture had to do with hope.  After the exile was stopped, there was hope for the Jews because they were rebuilding the Temple in Jerusalem.

For people during this time, going back to Jerusalem could be a scary thing, since they had been living their lives in exile for so long. “They are aliens in a land whose inhabitants live by other values and worship other gods. But the psalmist also knows that the fall of Jerusalem is now thirty or forty years in the past, and many of the Israelites are in danger of forgetting their true home. Many have married, made money, even risen to positions of prominence in Babylonian society. They have lived in Babylon so long that it is beginning to feel acceptable” (Kinnamon). During this period of time, prophets were working to help those previously exiled to see the importance of going back to Jerusalem, although they may have been comfortable in exile. To get them to go back, the prophets delivered hope to these people for what the future back home would hold. It was a message that was slowly received. After it was relayed to them, most of the Jews were in denial of exile in the first place after it was told to them. Most chose to stay at first, but as the situation in Judah continued to improve, they eventually began to flow back into the homeland.

It was during this time that Isaiah told the story of the suffering servant. This story is a metaphor for the larger suffering done by those who were exiled. The suffering servant’s message is that they all had to go through this for the greater good that was to come. It was one of Isaiah’s most memorable monologues, as he highlighted that the Israelites were not suffering in vain.

Not much is known about the author of Isaiah II as an individual, but much is known about his theology. In Isaiah II, God is the King of all creation, who controls the fates of all nations, even the enemies of Israel and Judah (Peels, 2012). One major theme is God’s complete control over the earth as creator of the universe (Peels, 2012). God also proudly declares that He is the creator of the earth and heavens (Is 45: 12, 18).  Another theme in Isaiah II places God’s throne above the circle of the earth (Is 40:22).

A major part of Isaiah II is the four passages about the ambiguous Servant of the Lord.  There are many suggestions as to who the servant was such as Cyrus, Isaiah II, the nation of Israel/Judah, or Jesus in Christian theology who established God’s rule (Peels, 2012). The first Servant passage (Is 42: 1-9) has the Servant called to bring justice and freedom to Israel and the coastlands beyond. In the second passage (Is 49: 1-7), the Servant is called by God, restoring Israel, and making them a “light to the nations”. The third passage (Is 50: 1-11) has the Servant call people to the Lord despite persecution. Finally, the last Servant passage (Is 52:13-15, 53: 1-12) describes the Servant’s suffering as redemptive. These passages are still relevant and continue to provoke curiosity in scholars today.

The command to reject useless idols for God who is all-powerful is an important part of the theology (Peels, 2012). God is very clear that He cannot be an equal to the powerless works of artists (Is 40:18-20). God tells the Israelites that He alone is God and cannot be compared to the blind, mute, deaf, and helpless idols of Babylon (Is 46:1-9).

Another major theme of Isaiah II is that God will redeem the Israelites in a second Exodus (Blenkinsopp, 110-111). God promises to be Jacob/Israel’s redeemer (Is 41:14). The destruction of Babylon is even described in the same way as the destruction of the Egyptian army in the Red Sea  before the Lord declares that what He is doing now is even greater than before (Is 44: 14-20).

Written by John Goldingay, the David Allan Hubbard Professor of Old Testament in the School of Theology of Fuller Theological Seminary, the first paragraph on page 253 does a great job of setting the political and social scene brought on in the time period of the end of the exile. The following sections go further into depth what was briefly touched on in the opening paragraph.

Written by Michael Kinnamon, a professor at Lexington Theological Seminary, the first half of this reference does a nice job describing the second book of Isaiah, and the significant role of a prophet during this time.

Written by Gary Smith.  This source was very useful because it talks about who the target audience was when Isaiah II was written.  The source talks about the history of Isaiah II, and has a lot of cultural references about the time of Isaiah II.