Research and information on censorship and banned literature

Project Censored is an organization focused on supporting the freedom of press by exposing cases of media censorship and promoting education about the importance of a free press system in democratic governments. To learn more about this organization, visit their webpage here.

Index on Censorship is an organization devoted to defending and encouraging the freedom of expression internationally. To learn more about this organization, click here.

Censorship is the suppression of speech, public communication or other information which may be considered objectionable, harmful, sensitive, politically incorrect or inconvenient as determined by governments, media outlets, authorities or other groups or institutions. It can occur through and in various mediums, from the imprisonment of journalists or citizens to the removal of books like Harry Potter from school libraries. Reasons for censorship can span just as wide in range, though it is most often done for religious or political reasons, and occurs in every country throughout the world. Below are some famous historical cases of censorship which prove that censorship isn't confined to time or place.

Most Pertinent Scholarly Sources Found by Honors CIP on Censorship

Bald, Margaret. Banned Books : Literature Suppressed on Religious Grounds. New York: Facts On File, 2006. Print.
Once our focus on religious censorship came about this text became extremely helpful in our research.  This explained how different religions would ban literature contradicting their own beliefs, and the effects on the followers of said followers. This further went into examples of common books that had been banned due to the ideas and viewpoints which various religions did not agree with. This helped provide our group with modern examples to contrast the older work that the Catholic Church had banned.

This was an excellent beginning point of our research because it gave us a list of frequently challenged books in America, examples of major incidences, and explanations for why the books are being challenged. It provided a current analysis of the process of challenging books in America, and why it is such a problem.  From analysis of this process our group found how easy it was to have a book pulled from a library shelf and how detrimental to student development this can be. Not only did this focus on books in libraries, but also the overarching theme of censorship in America like the Supreme Court decisions on censorship on the internet and in book publishing.

This book explored the effect of censorship on American society. It illustrates many cases of local censorship like that in libraries that are hard to monitor and keep track of. It also provides an examination of the sources of censorship which may be fear or cultural prejudice. It gives an overall view of suppression of information and the effects of this on a society. Although this may not necessarily be considered banning, books have been taken off library shelves at parents’ requests.  The book explored various reasons for “banning” and the negative effects on the development of thought and point of views.

The name of this book was slightly deceiving, however it provided us with valuable background examples of why books were being banned. This had a very in-depth index that allowed us to look up many books which were commonly being banned today. In addition we were also able to look at some of the books we had found on the Forbidden Index and see a little background information about them.  Having the knowledge of why these books had been banned was a valuable asset because it allowed us to be able to analyze the reasons.

This book provided an in depth analysis of the groups that are working to ban books and why they are having such success. It expands on the number of books being banned throughout the years and rises that called for more radical banning. It moves through history and tells why groups could successfully have books removed and how this has evolved today. It gives firsthand interviews from those involved in defending books that have commonly been challenged and the struggles they constantly face. Foinally this book has a very large index that has updated lists of authors and books that have been banned and the reasons why. 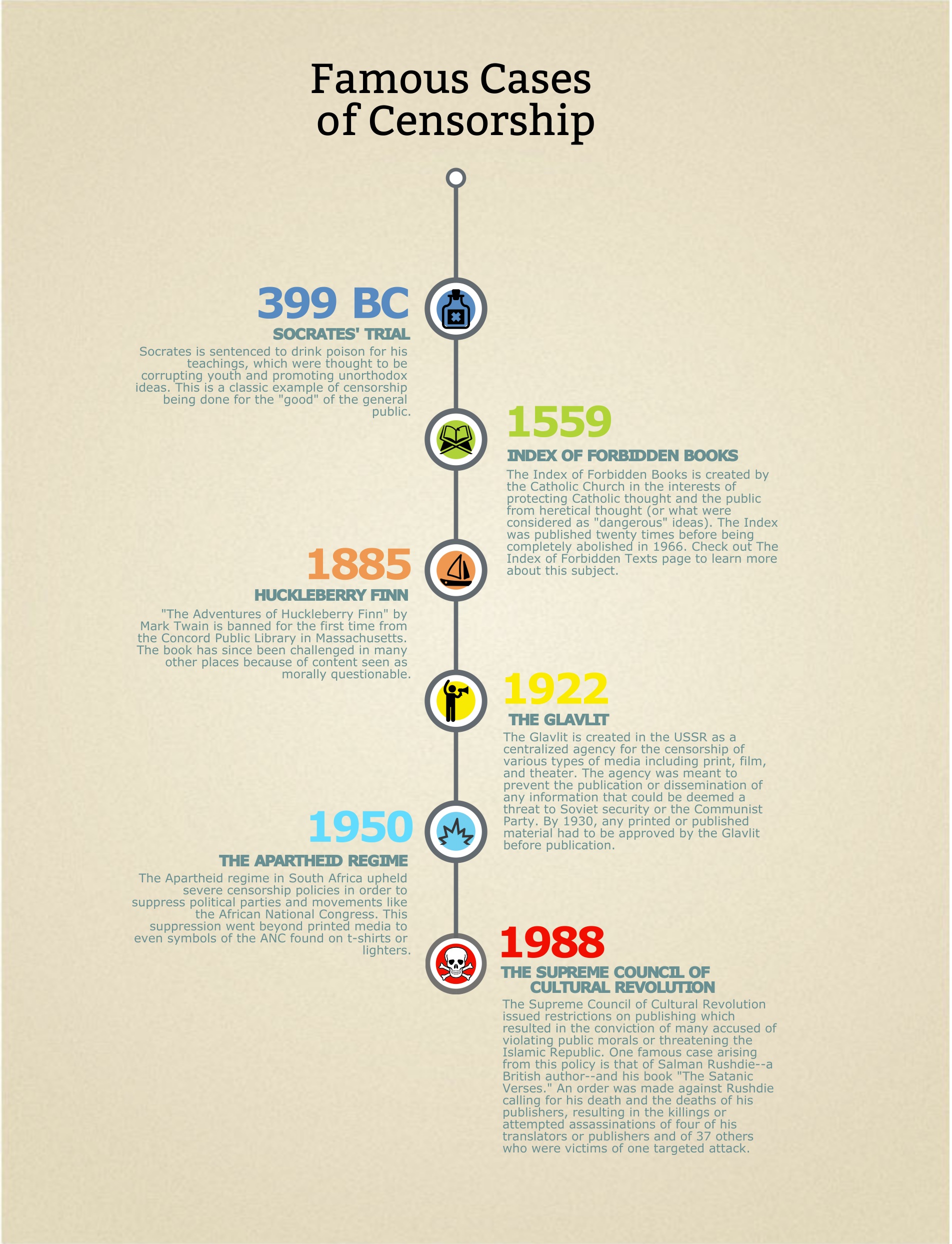 Timeline was adapted from information found on the Beacon for Freedom of Expression's website. To see the full timeline and more cases of famous censorship, click here.